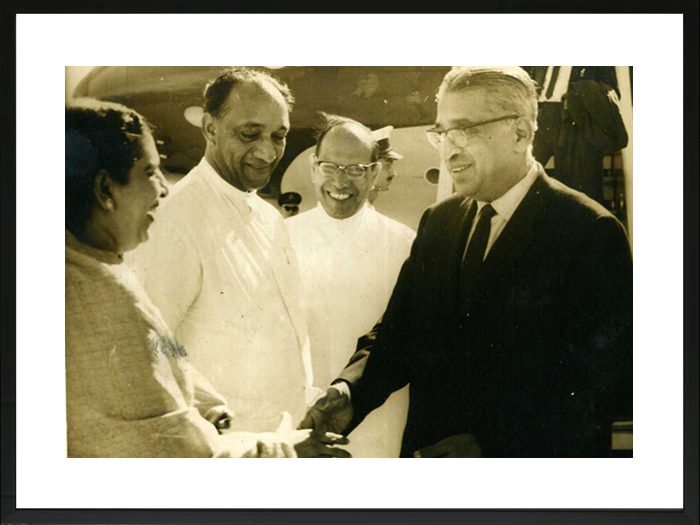 “A time like this demands, Strong minds, great hearts, true faith and ready hands; Men whom the lust of office does not kill; Men whom the spoils of office cannot buy;
Men who possess opinions and a will; Men who have honor; men who will not lie”

Dudley Shelton Senanayake was the first born son of Rt. Hon. D. S. Senanayake, the first Prime Minister of Ceylon. He was born on Poson-Poya of 1911, an auspicious day for all Ceylonese Buddhists as it signifies the advent of Buddhism to the country. When D.S. received the news that he was blessed with a son, he was in the company of his father, Don Spater who was gifting lands to build a temple in the adjoining village.

Dudley received his primary and secondary education at his father’s alma mater, S’ Thomas’ College. He was a model student that exceled at both academics and sports of a varying nature. He was appointed Head Prefect of the School and won colours for Cricket, Boxing, Hockey and Athletics.

He furthered his studies at the University of Cambridge, continuing his passion for Cricket and Boxing. Completing his studies in Law, he was called to the Bar, prior to leaving England. He returned to Sri Lanka at the age of twenty four, taking his oaths as an advocate. However, disillusioned by the legal field, his career came to an abrupt end.

At the onset, Dudley was not keen on politics, despite his father’s colossal contribution hitherto. He reluctantly agreed to enter into politics in 1936, due to persuasion by those around him.

He became the youngest member of the 2 nd State Council by successfully contesting the Dedigama seat. His affinity to fairness for all, was apparent from the very beginning, as he constantly defended those within his party, as well as those from the opposition.

Though still very young, he was not afraid to oppose the Colonial Government when he believed that their activities were dictatorial. He spoke out in favour of two members of the opposition who had been incarcerated for opposing the war effort during World War II, stating “I would like to ask the Hon. Members what is it that the United Nations are fighting for? What is the freedom that they talk so much about? Do we not see the characteristics of Fascism in this act? I would class this as one of the greatest acts of Fascism ever perpetrated in this country.”

Ceylon had made a slow but steady progression from semi-colony to self-governance due to the untiring efforts of D.S. and on 4 th February 1948, he re-hoisted the national flag following almost 500 years of subjugation by European Colonists. He appointed Dudley as the first Minister of Agriculture & Lands of the post-independence government. 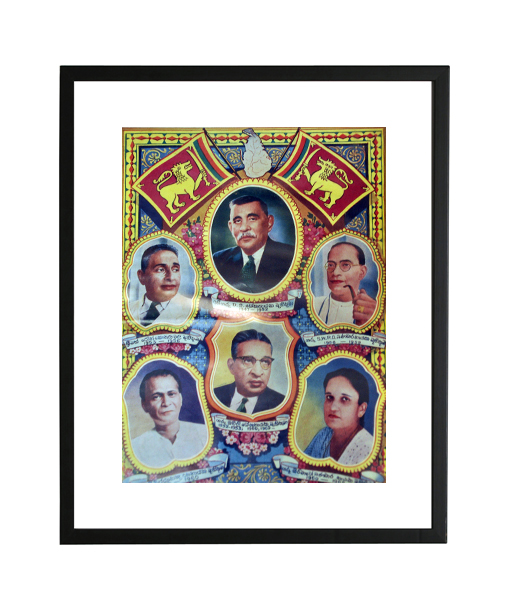 Though Dudley was reluctant to accept the position, his father made it clear that he needed someone he could trust to carry through the work initiated by him. It is said that on one occasion, when he sought his father’s assistance, he was politely told that as the Minister in charge, he should seek a solution by himself.

Although many were skeptical about Dudley’s capabilities, he proved to be most efficient at the task bestowed upon him, making necessary changes and improvements by initiating the policy of giving land to the poorest community and providing them with the necessary facilities to engage in the production of paddy and other food crops. He also advocated a guaranteed price for paddy.

Speaking on the Land Alienation Policy, he said, “The greatest feats of man have been the achievements of a free and unfettered mind. And, under a totalitarian form of government, with all that it implies, with all its ramifications, the mind of man can never be free. We prefer the path of economic freedom, while maintaining the essentials for the growth of a free and unfettered mind. ”

The Gal Oya Scheme, the first multi-purpose dam to be built in the country and solely financed by Sri Lanka’s own funds, was without a doubt, his greatest achievement. Despite accusations from the opposition at the time, Dudley believed in the long-term benefits of the scheme, which to this day is a major source of water in the Eastern Province. Referring to this scheme in Parliament he said: “It is recorded in history that when the tank Parakrama Samudraya, or the Sea of Parakrama, was built, it was then the proud boast that the volume of water in all other tanks then existing in Ceylon could not exceed that of the Sea of Parakrama. It can now be claimed that the volume of water in all the tanks of the island today, including the Parakrama Samudraya, will not exceed the volume of water that will be enclosed in this Gal Oya reservoir.”

Along with the Walawe irrigation scheme, over 30,000 families had been settled, contributing immensely to the development of the country. The Food Drive, extended to paddy and other crops, benefitting the farming community to a great extent.

Dudley was appointed Prime Minister of Ceylon for a total of four times during his 37 year political career. The first in March 1952, following the death of his father. Then in May of the same year, when he won the election, once more in March of 1960 and finally in 1965, for a full term of five years.

March 1952:
The sudden death of D.S. Senanayake left the country mourning the loss of a great leader. The Government Parliamentary Group chose Dudley as his successor. Dudley however, was not content and insisted on dissolving Parliament to obtain a fresh mandate, after a mere thirteen days as Prime Minister. He contested and won the election quite convincingly, dispelling all doubts about being appointed due to his father’s insistence.

May 1952:
Despite winning the election with a two-thirds majority, Dudley was plagued by harassment and conspiracies during this period. The accusation of D.S. naming him as his successor resurfaced along with charges of favoritism for the United Tractor Company, chaired by his brother Robert. He was constantly criticized for the continuation of the Defence Agreement with the United Kingdom and severely attacked regarding the country’s foreign policy.

One positive outcome of his short tenure was the Rubber-Rice Pact with China, making it the first time a country of the free world entered into a trade pact with a Communist Country.

A year later, Dudley resigned as Prime Minister, citing illness and announced his retirement from politics, paving the way for Sir John Kotelawala to become the 3rd Prime Minister of Ceylon.

March 1960:
He re-entered politics as the leader of the United National Party in 1957, making it the largest party in Parliament. Due to an absence of an overall majority at the election, he was compelled to form a Caretaker Government, briefly becoming the Prime Minister for the third time. What transpired thereafter forced the UNP to the Opposition, making Dudley the Leader of the Opposition from 1960-1965.

March 1965:
In the general elections that followed, the UNP won the overall majority with the support of seven parties, making Dudley the Prime Minister for the fourth time. A truly National Government, comprising of a collective of political parties, it was the first Government to run its full term, bringing a long desired communal harmony. Dudley’s strong belief that the nation’s wellbeing is linked to food security, ensured that the new Government was committed to uplift Agriculture. Following his father’s lead, he initiated the Mahaweli diversion, though his government was defeated prior to its completion.

Over 40 years after his death, Dudley is still fondly remembered by those who knew him as the “Gentleman Politician”. A simple man, he was often seen driving his own vehicle, or attending to a private errand, without any security personnel accompanying him. In one instance, his personal detail had lost sight of him and later found the Prime Minister, also a passionate photographer, strolling on the Hikkaduwa beach with his camera.

An extrovert among friends and family, he was modest and shy in unfamiliar company. Throughout his tenure as Prime Minister, he stood against public funds being utilized for the private use of a public official, residing at his private residence and financing all expenses incurred by his private funds.

He was well-read, witty in debate and a great lover of golf and classical music. Rooted with the firm belief that all men were equal, Dudley strongly advocated for amity among all communities and strived to build a “One Country – One Nation” culture.

In 1970, the Government was defeated at the General Election of 1970 and Dudley handed the post of the Leader of the Opposition to J.R. Jayewardene. He suffered a heart attack in early April 1973 and died within two weeks, leaving the nation in a state of deep sorrow.

At the time, he was only a Member of Parliament for the Opposition, yet millions poured in from all over the country to pay their last respects to this great man. An unknown admirer, laid a wreath penned with the question, “O my leader, please answer me. Is it honesty or kindness that is more in thee?” – An acute portrayal of the love and admiration the people had for him.